Tickets are now available for the 2017 Ricoh Women’s British Open to be played at the wonderful Kingsbarns Links jsut south of St Andrews in Fife and with the world’s top five players already confirmed, golf fans can be assured of witnessing some world-class play between the 3rd and 6th of August. 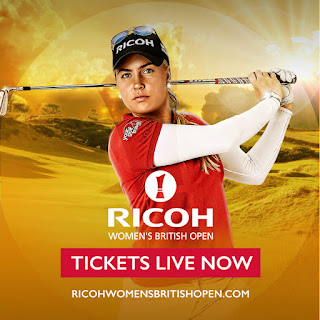 The Women's British Open is renowned as one of the world’s most international Majors, with players from 30 nationalities competing last year, the 2017 Championship makes its welcome return to Scotland playing over Kingsbarns for the first time and 21-year-old Ariya Jutanugarn will be looking to defend her title over the challenging layout.

There is a special advance purchase offering there is 20% off general admission one-day tickets and season tickets for all purchases online until Midnight 10 June 2017. If you are playing nearby at that time or looking to plan a trip around the event why not give one of the SITOA members a call or email and they will advise you on golf, accommodation, transfers and tickets for your Scottish golf trip.

Upgraded Clubhouse tickets and Official Corporate Hospitality packages are also available in the Champions Club overlooking the 18 green and these areas of upgrades and VIP add ons is for certain one of the areas of expertise of every golf tour operator in SIGTOA.

The Ricoh Women’s British Open was founded by the LGU in 1976 and has been staged in conjunction with IMG, a global leader in sports, events, media and fashion, since 1984. The event has been co-sanctioned by the LPGA and LET since 1994, and gained Major status in 2001. The LGU merged with The R&A in January 2017.

Kingsbarns has hosted the Alfred Dunhill Links Championship since 2001, Final Qualifying for The Open in 2010 and the 2013 Ricoh Women’s British Open Final Qualifying. The course has been widely acclaimed by players and media alike since opening 14 years ago and has fitted seamlessly into the famous golfing area of St Andrews.