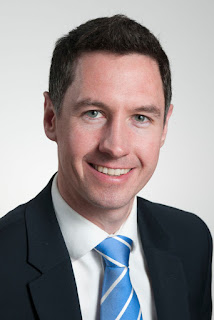 As part of an ambitious drive to further its reputation as one of the world’s top golf destinations, Wells joins the Carnoustie team from The R&A in St Andrews, where he was the Director of Championship Staging at The Open.

The Open Championship, will return to Carnoustie in July 2018 and SIGTOA are looking forward to both the appointment and the return of the championship to Scotland.

"We'd all like to wish Michael Wells the very best of luck in his new position at Carnoustie and we are all looking forward to helping work with the new CEO in maximising the opportunities for developing the golf travel trade side of the business over the years ahead. Such a high profile appointment is good news for Scottish golf as a whole and reaffirms the importance of the sector to the economy"

He won the post over an impressive field of candidates from all over the world and Carnoustie Chairman, Pat Sawers, said, “Michael has extensive knowledge of all facets of golf administration, particularly in relation to staging major tournaments.

“He has done a great job as a Director at The R&A and I believe he is the right leader to entrust with developing our brand and ensuring that Carnoustie Links continues to be recognised as one of the most challenging Links golf courses in the world.”

Michael Wells already knows Carnoustie Links well. During his time at The R&A, he has been involved in The Open on two previous occasions there, including his first Open in 1999 when Paul Lawrie lifted the famous Claret Jug, and in 2007 when Padraig Harrington won the first of his back-to back victories in the Championship.

He is expected to take up his post shortly after The Open at Royal Birkdale and said,

“I feel privileged and honoured to be selected to become Carnoustie Golf Links’ first Chief Executive. Carnoustie has a reputation for being one of the toughest courses in the world and one that every golfer should aspire to play. I am very excited about the opportunity to work alongside the fantastic team at Carnoustie and to help develop its reputation as a world-class golfing destination.”