What are Scotland's Best Golf Holes

Maybe one of the most subjective questions you could pose for any golfer with every single one likely to have an entirely different collection in their preference lists. However VisitScotland recently ran a poll to get a snapshot of their consumers and found the following results. 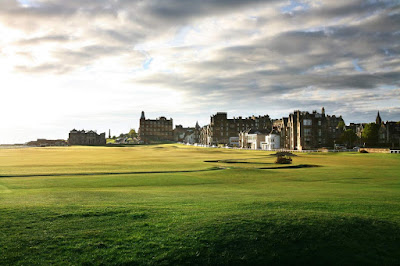 Like any best of lists it will divide opinion. What do you think?
The closing hole at St Andrew’s Old Course has been voted as the best golf hole in Scotland, after a poll of 3,000 golfers chose it ahead of a formidable selection from the country’s world-class courses.

The poll, undertaken by VisitScotland, set out to discover which golf holes in Scotland exhibited #ScotSpirit – a feature of the national tourism organisation’s Spirit of Scotland campaign. It asked golfers to vote for the best opening and closing holes, a best Par 3, 4 and 5, as well as a best view and a best overall hole from a selection of shortlisted holes across the country.

Tom Morris, St Andrews’ iconic final hole and home to the Valley of Sin, took the award for the best hole and best closing hole, while its neighbouring 17th hole was voted the best Par 4 in Scotland.

The 9th hole at Cruden Bay Golf Club on the Aberdeenshire coast claimed the award for best view. The course, which boasts stirring views across the Bay of Cruden and Slains Castle, beat out competition from the Castle Course at St Andrews, Machrihanish Dunes and Gullane Golf Club. The category included nominations for more than 300 individual holes, testament to the wealth of stunning views across Scotland’s courses.

Malcolm Roughead, Chief Executive of VisitScotland, said: “We’re thrilled that the golfing public have taken the time to put their support behind their favourite courses in Scotland, from local favourites to the home of golf itself, St Andrews. Every club plays it part in making Scotland the essential golfing destination, so we’re proud to honour such a diverse range of our spectacular courses.”

Machrihanish and Cruden Bay weren’t the only local courses to perform better in the poll than some of their more well-known compatriots. Moray Golf Club’s closing hole, overlooking the Moray Firth, came second in its category, ahead of both Carnoustie and Turnberry. The 12th hole at neighbouring Hopeman Golf Club, received more than 120 votes for the best view, despite not being shortlisted.

The Postage Stamp (8th) at Troon was voted the best par 3 in Scotland, while the 12th hole at Kingsbarns Golf Club on the Fife Coast was voted the best Par 5. The neighbour of St Andrews finished ahead of holes from Castle Stuart (18th), 2014 Ryder Cup venue Gleneagles (16th) and the recently redesigned Ailsa course at Trump Turnberry (10th).

The final results of the poll were as follows:

For more information on the poll and the breadth of courses Scotland has to offer, visit https://www.visitscotland.com/blog/golf/best-golf-holes/
‹ News Archive